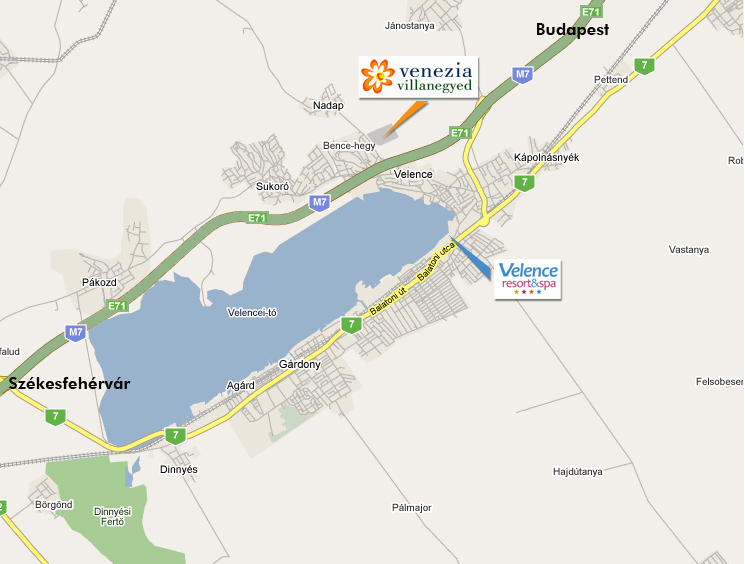 Lake Velence and its surroundings are situated along one of the busiest touristic routes. The M7 highway runs along the northern bank of the lake, connecting the nearby settlements with Budapest, Székesfehérvár and the Balaton region. The 70 motorway runs along the southern bank of the lake as well as the main railway line connecting Budapest, Székesfehérvár and Nagykanizsa. There is a passenger transport service by water on the lake. There are ports at each larger settlement so Velence, Velencefürdő, Gárdony, Agárd, Pákozd and Sukoró are also accessible by water in spring and summer.

Beside Lake Velence, thermal water is the other major natural resource of the region. It was discovered first in the 1970s in Agárd, where a thermal bath was opened in 1986 using the water.

The surface of the water is 26 sqkm, the lake is 10.8 km long, its average width is 2.3 km, average depth is 1.6 m, and the coastline is 28.5 km long. On the northern bank there is a range of mountains creating a diverse, scenic environment, and offering a nice destination for trips. People who want to relax are attracted by a number of beaches, campsites and hotels by the lake.
The highest point of the Velence Hills is the Meleg-hegy. The Mészek-hegy in Pákozd reaches down into the reedy parts of the lake. Here you can see the monument of a major event in Hungarian history, commemorating the first battle won during the War of Independence in 1848.

The opportunities for sports on the lake were discovered as early as the 19th century. By now it has become a busy spot for sailing, surfing and rowing. We must mention here the rowing track also suitable for international races, the water ski track, and the free surface excellent for sailing. When the lake is covered with ice, winter-sport fans can skate, skate-sail and skate-sledge.

Apart from relaxing on the beach or doing water sports the area has several other attractive events and touristic opportunities to offer. Those who are interested in characteristic natural features can take a tour on the Haraszt-hegy botanical and geological educational trail leaving from Csákvár where they can study the submediterranean flora formed on the varied terrain of the Vértes range of hills and they can also see rare species of birds nested in the wilderness.

A special treasure of the lake is the romantic, extensive reed marsh with its narrow passages and inlets. It is interesting to note that each clearing and reedy part of the lake has their own names like Hosszú tisztás, Égett nád, Kárászos. The sudds represent an extraordinary natural value. The closed areas of the bird reserve on the lake is not only frequented by the indigenous birds but also by migrating species to have a rest; there are over 30 species of birds who nest and hatch eggs here.

The lake has been abundant in fish since the ancient times. Fishing as a business was stopped in 1974, since then only sport fishing is allowed. In order to maintain modern conditions landing-stages and anglers' camps were established. Tourism has a very positive effect on the area as the region is the second largest waterfront settlement group in Hungary, but more and more people from other countries are coming to stay and relax here.